Australians love big things. It is unknown what is behind this, but every tourist visiting Australia is guaranteed to hear about The Big Banana, The Big Lobster and The Big Pineapple. Some think that this obsession with large sculptures can be explained by the scale of the country. However it is quite possible that this is just an attempt to create a tourist attraction from scratch. The giant purse lies in the Melbourne downtown, not far from Coffs Harbour stands The Big Banana and The Big Milkshake Container in Tongala, Victoria There are also the The Big Gold Panner, The Giant Worm in Bass, Victoria, as well as The Big Cigar in the town of Churchill, named after Winston Churchill. Then there are also The Big Wine Cask, The Big Mosquito in Hexham, The Big Cow in Nambour and, of course, the national legend depicted in The Big Ned Kelly. 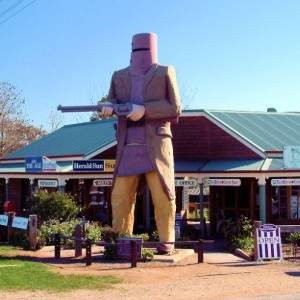 The Great Ocean Road is rightly considered to be one of the most picturesque ocean roads in the world. The culmination of your trip will be visiting another of Australia’s icons – The Twelve Apostles

Full day tour to Phillip Island, where you will have fish caught with your own hands, try magnificent Australian wine, take a walk in a wildlife park amongst traditional Australian animals and see a Penguin Parade the conclusion of the day